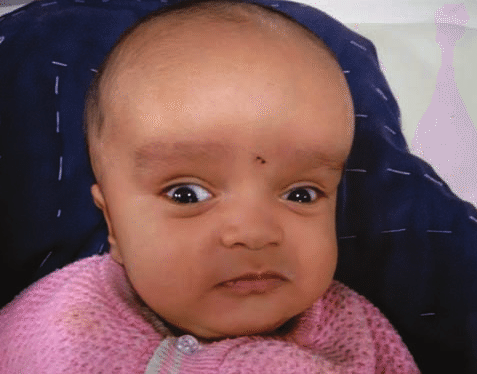 The term macrocephaly is used to define a head that’s overly large. Macrocephaly usually indicates a condition or complication of the brain.

Macrocephaly is defined by a particular standard: if the circumference of the patient’s head exceeds 2 standard deviations above the mean for their age; or if the size of the head is bigger than the 98th percentile.

Macrocephaly is a symptom of other diseases. The benign form of macrocephaly is an inherited condition. It occurs in families whose members are predisposed to having large heads.

In some cases, there might be a disorder of the brain, such as excess fluid or hydrocephalus. If hydrocephalus is caused by an underlying condition, the patient will have to undergo treatment.

Sometimes, the brain might be affected by a condition where there’s a lot of fluid in it. This condition is known as a benign extra-axial collection. However, there’s usually no need for treatment because the amount of fluid isn’t much.

Other conditions that may trigger this condition include:

Some children do have benign macrocephaly. And they may not experience any symptoms other than large head circumference.

In some cases, children may develop slowly, like attaining learning milestones. Other symptoms of macrocephaly include:

Presently, there’s no evidence to prove that the condition is more prevalent in children of particular nationality sex, or race.

Macrocephaly may be diagnosed by a pediatrician. Your child’s pediatrician will track measurements of your infant’s head over time. He may also perform neurological tests including an ultrasound, CT scan, or MRI to have a better look at the brain and the head.

Ensure that you inform your doctor if your family has a history of large head sizes.

The treatment depends on the diagnosis.

If brain scans yield normal results, and the tests do not show any problems, the doctor will keep monitoring the child’s head. As a parent, you also have a role to play, watch out for:

There are limited studies on macrocephaly in adults. This is partly due to the fact that head measurements are usually taken only when the baby is developing. In adults, this condition is diagnosed when the head (occipitofrontal) circumference exceeds 3 standard deviations above the normal. It could also be a brain weighing more than 1,800 grams. This is due to an increase in the size of the cerebral tissue. Most adults who have the condition do not grow into adulthood.

Complications do not readily occur in benign macrocephaly. People whose brains have overgrown may have their brainstem compressed. To decompress a brainstem, one has to undergo surgery.

People who have this condition usually develop hydrocephalus. Hydrocephalus is a condition where there’s an accumulation of the very high amount of cerebrospinal fluid in the brain.

Children with benign familial macrocephaly usually do not have any major complications while growing up. The outlook usually depends on the underlying condition and how severe it is.

How Long is Baby Formula Good for Once…