An absence seizure is a form of epilepsy that is characterized by short-term changes in the activities of the brain.

Have you ever seen someone, especially a kid or a teenager, staring into space? How about one making hand movements suddenly? Okay. How about a kid fluttering his eyelids, smacking his lips together, doing a backward and forward body movement, looking suddenly fixed at a point without being able to move, or suddenly stopped talking in an attempt to make a sentence? Any of these are usually brief, in fact not later than fifteen seconds. Have you ever seen one? I bet you will have to be a very observant person to notice this.

If you have not seen any kid do that, I have just painted a picture of one who was experiencing a state of unconsciousness called, absence epilepsy. You can as well name it, petit mal seizure.

It occurs suddenly. This indicates an underlying neuromuscular disorder. For the fact that the state of unconsciousness such young folks experience is very brief does not make it not to be dangerous.

What are the symptoms of an absence seizure?

Kids between the ages of 5 to 9 are the most susceptible. Although adults can be affected. Usually, kids suffering from this are most times thought to be distracted or even mischievous especially in the school. This is because that kid will appear to be out of his/her body.

To know whether someone is experiencing a petit mal seizure, watch them closely. You will find out that they are not aware of their surroundings, not even by a slight touch or sound. 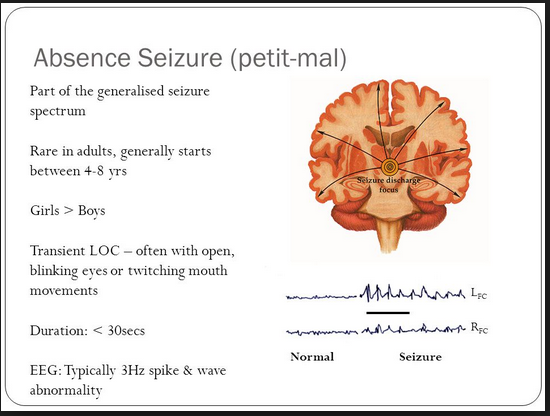 What causes an absence seizure?

The brain is an amazing organ that does amazing things that ensure that every cell, tissue, organ, and system of the body works well and is in harmony with one another.

It uses ‘wires’ called neurons and chemicals to interact with various parts of the body. That is how it connects and functions. Whenever anything interrupts with its connections, something will go wrong inside the body and this can be visibly seen.

Anything that therefore affects the brain will affect its connections and activities. It can affect some or everything it controls.

So what is the cause of an absence seizure?

Its cause has not yet been traced. There are speculations that it might be caused by genetic defects and hence might be transmitted from affected parents to their kids.

Other thought leaders have reported that activities that expose to flashlights and hyperventilation can trigger its occurrence. And doctors have not been able to determine its cause in other patients.

Whatever the case may be, petit mal epilepsy is usually associated with the repetition of electrical signals in the brain and sometimes abnormal levels of brain chemicals called neurotransmitters.

How is absence seizure diagnosed?

Upon visiting a neurologist, he will ensure he will rule out unlikely causes of the symptoms you are having before he goes a step further to diagnose you of absence epilepsy.

He will run an MRI scan. An MRI will take a cross-sectional view of your brain to see the structures and blood vessels therein. Injuries and tumors in any of those can be seen with an MRI.

Electroencephalography can also be used to diagnose absence epilepsy. This test is usually combined with the following; hyperventilation, short but bright lights. Electrodes will be fixed on different parts on your head. You will then be asked to breathe really fast (hyperventilate) or short bursts of light will be shone on your face. The effects of these activities will reflect on your brain waves. This wave can tell whether your brain is working well or not.

How absence seizures are treated

This kind of seizure can be handled with medications specifically designed for them. It is usually not easy finding which works well for you. Your doctor will have to give you different medications at a low dosage until he finds that which gives the desired result. He can then increase the dose afterward.

Common drugs for their treatment;

Swimming can place you at a very high risk of drowning as the seizures can come up anytime. So is it with driving; you can have an accident should it come up when you are on the wheels. This means you have to look for help in any of these activities. You should always plan not to go swimming alone if you must. And for driving, get a standby person.

Your doctor might inform you on and restrict you to other activities that could predispose you to dangers particularly if your seizures are not under control.

There are a few states that have laws about road use by special kinds of people. You might have to find out about it in your states.

There are provisions for special bracelets that can be worn for a medical identification in cases of emergency.

You might also want to get an education on what you should do when a seizure occurs. It will really help you. And if you are a loved one or friend to someone who is suffering from absence epilepsy, you can educate them, too.

What are the complications of absence seizures?

Although they can occur several times a day, they do not last more than twenty (20) seconds on the average. This implies that after this time, the affected person can get back to his normal lifestyle. During this time, he is unaware of what is happening around him. Sometimes, they are not even aware they are having a seizure. It does not damage the brain, hence, intelligence is intact although some children because of the on and off switch of consciousness might have a bit difficulty in learning.

Some of them could even imagine that they are daydreaming. This is a huge distraction.

It is very hard for absence seizure patients to fall during an attack. But if they do and sustain injuries especially in the brain, they can have negative long-term effects. Most affected kids will usually outgrow it as they grow while some can worsen as they grow.

What is the long-term outlook?

Although anti-seizure therapies have found usefulness in controlling this kind of seizure. It has helped affected kids to cope with school and manage their social life.

Notwithstanding, the Epilepsy Foundation has reported that close to 65% of children are healed in their teenage years. That is pretty good news, you know. 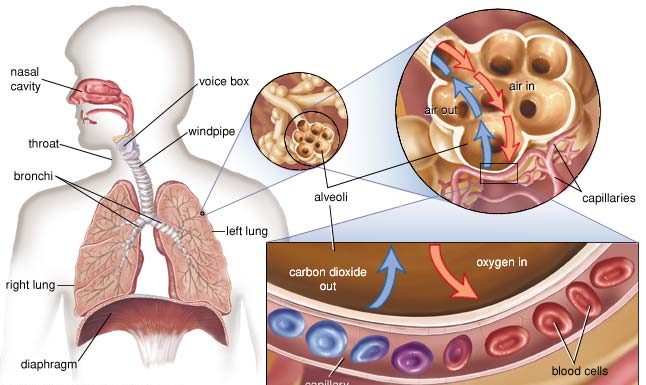