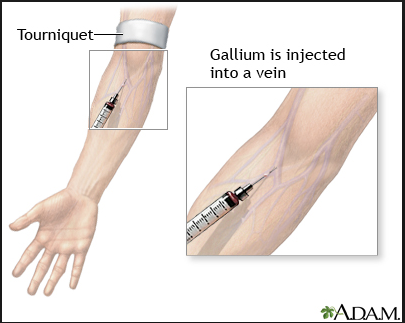 What is a gallium scan?

Gallium is a metal, specifically a radioactive metal. As a radioactive metal, it can be used as a diagnostic tool for specific disorders such as cancer. It can also be used to evaluate the presence of tumors, inflammations, and infections in the body.

A gallium scan is hence described as the use of gallium to diagnose the presence of abnormalities in the body. It works by accumulating in body tissues that are not healthy. It will never accumulate in healthy cells, tissues or organs.

To perform a gallium scan on you for instance, a measured quantity of gallium in solution form will be injected into your body through one of the veins in your arm. The gallium once injected into your vein flows in your blood and into body tissues and organs. The gallium will be allowed to stay in your body for a good while. After this time, your body will be scanned to see the distribution of the substance in different parts of your body. This scan is going to be at the section of the hospital called ‘nuclear medicine’

Although gallium is radioactive, its risk of radiation exposure is not as high as those from CT scans and X-rays.

You don’t have to do any, preparation for a gallium scan. What you will realize about the scan is that the time interval between when you will be injected and when the gallium will be scanned can take a good number of hours. The test will hence have to be scheduled to accommodate your own schedule.

Purpose of a gallium scan

You will be invited for a gallium test by your doctor if you had earlier complained about recurrent fever or pains to him. Another reason why a gallium test will be ordered for will be instances where your doctor suspects you have cancer. It is also important in follow-ups for those who are undergoing or have undergone cancer treatment. It is also one test that can be used to inspect your lungs.

Gallium scan of the lungs

When a gallium test is used to inspect your lungs, it is used to assay the state and size of your lungs. When your lungs aren’t looking normal either in texture or size, more gallium will be collected in them. This abnormality might be an indication of any of the following ill health states:

A gallium test is not a confirmatory test for all the cancer types.

Preparing for a gallium scan

Unlike most tests that require you to skip your breakfast, gallium test doesn’t require such.

You are not going to take any medications, too. But there are exceptions where you are going to take an enema or a laxative to enable you empty your bowel. This is because food can influence the test result.

If you are a woman and you are pregnant, anticipating a pregnant or are breastfeeding a baby, you should endeavor to let your doctor know ahead of time. This is because a gallium test is a radioactive test and radiations are not too friendly with women who are especially pregnant. Neither is it good for nursing mothers. It is equally not advisable to use a gallium scan on children.

How a gallium scan works

When you get to the nuclear medicine department, you will be administered with a solution of gallium right in your vein. You should experience some pains that are not serious but rather mild. This pain will be because of the syringe inserted into your arm. The site were the syringe was inserted into your vein will also feel tender for a few minutes. You can go back to work after the gallium injection. You will have to return between 6-48 hours after the injection to scan for gallium distribution in your body.

On returning to the hospital for the gallium scan, you will be required to change into a hospital gown that will be given to you by the doctor. All metallic objects on you including your jewelry will have to be removed, too. You will then be given a table to lie on. A scanner will then be moved around your body. A camera fitted to the scanner then captures images of your body organs and displays them on a monitor. The scanner can be run over your body for 30-60 minutes.

You don’t have to move your body while the scanner is used to view your internal organs.

The scanner won’t in any way touch you neither is it going to inflict any pains on you.

If you are the type that finds it hard to remain still on a hard table, you might have to let your doctor know. He can give you medications that will make you remain comfortable and still all through the time of the procedure. The medications are usually sedatives.

It is possible sometimes for the scanning process to be done again. In that instance, you will have to revisit the hospital but you won’t have to take any gallium injection again.

Interpreting the results of a gallium scan

Your test result will be interpreted by a radiologist and will be communicated across to you through your doctor. The collection of gallium in a particular tissue or organ is usually a pointer to infection, tumor or an inflammation. Cancer tissues will definitely take up more gallium.

Gallium will most times reveal any infection in the:

Is a gallium scan dangerous?

But for its radiation exposure, gallium is a good diagnostic test for the presence of specific diseases like cancers, sarcoidosis etc.

Its radiation risk isn’t as high as those from X-rays and CT scans except in rare instances where you have to undergo multiple gallium scans.

In a matter of days, any gallium present in your body will be flushed out of your system naturally.