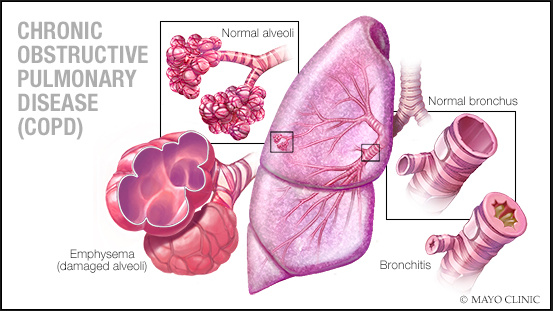 A study by the Centers of Disease Control and Prevention (CDC) has it that the third major cause of death in the United States is chronic lower respiratory disease, most especially chronic obstructive pulmonary disease (COPD). At least three million persons are killed globally by this disease every year. In the United States, at least 16 million persons are hospitalized yearly because of this disease. The chronic obstructive pulmonary disease develops gradually and gets worse with time. At the initial stages, no symptoms may be experienced. Early diagnosis and treatment can help prevent damage to the lungs, respiratory disorders, and even heart failure. The first and most important step involves recognizing one’s personal risk factors for developing this disease.

Smoking is one of the major risk factors for the development of the obstructive pulmonary disease. At least 90 percent of COPD-related deaths are caused by smoking – this is according to the American Lung Association (ALA). Smokers are 13 times more likely to die from this disorder compared to those who have never smoked.

Prolonged exposure to tobacco is extremely dangerous. The more cigarettes you take, the higher your risk of developing COPD. Cigar smokers and pipe smokers also have a high risk. Your risk is also enhanced when you get yourself exposed to second-hand smoke. Second-hand smoke includes both smoke exhaled by a smoker and that from burning tobacco.

Smoking is the primary risk factor for chronic obstructive pulmonary disease, however, it is not the only risk factor. Outdoor and indoor pollutants have the potential to trigger the disorder after an intense or prolonged exposure. Indoor pollution includes particles from smoke of solid fuel used for heating and cooking. Examples include burning coal or biomass, cooking with fire, and poorly ventilated wood stoves.

One other factor that constitutes a risk is exposure to environmental pollution. The quality of indoor air plays a role in the progression of the disease, mostly in developing countries. Sources of urban air pollution such as traffic and combustion-based pollution poses a higher risk to global health.

Prolonged exposure to chemicals, industrial dusts, and gases can inflame and irritate the lungs and airways. This raises a person’s risk of developing chronic obstructive pulmonary disease. People who get exposed to chemical vapors and dusts, such as grain handlers, coal miners, and metal molders are at a higher risk developing COPD. A United States survey found that a fraction of COPD attributed to work was estimated at 19.2 percent overall, and 31.1 percent among those who had never smoked.

The role played by genetics, especially in those who have never smoked, nor been exposed to particulate matter, rarely causes chronic obstructive pulmonary disease. The genetic disorder results in a deficiency of the protein alpha 1(α1) – antitrypsin (AAT).

It is estimated that at least 100,000 Americans have AAT deficiency. However, not many persons are aware of it. While AAT deficiency is the only genetic risk factor that has been identified, researchers think that there may be other undiscovered genes involved in the disease process.

Chronic obstructive pulmonary disease occurs mostly in people who are 40 years and above, and have a history of smoking. The incidence increases with age. Aging is natural; there is nothing we can do about it. However, there are steps we may take to stay healthy. If you have risk factors for chronic obstructive pulmonary disease, then consult your physician and discuss with him.

Consult your physician if you are above 45 years of age, your family has a history of the disease, or you are currently smoking, or have a history of smoking. The key to successful treatment is the early detection of chronic obstructive pulmonary disease. It is essential that you quit smoking as soon as you can.