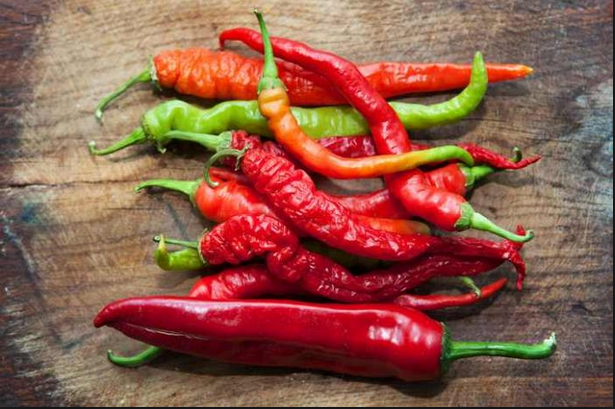 Chili peppers are not a new ingredient to the professional chef, and neither are they to the overzealous wife or mom at home. No! They’re also not new to the guy who loves cooking. Chili peppers are a very popular cooking ingredient. Scientifically, they are known as Capsicum annuum. They grow from the Capsicum pepper plants, and have a very unique hot flavor.

Chili peppers belong to the nightshade family. Members of this family include tomatoes and bell peppers. There are many types of chili peppers, like the jalapeno and cayenne.

Chili peppers serve their function as spices. They can be used in their powdered, or dried forms. They can even be used cooked. The powdered form of red chili peppers is known as paprika.

For a tablespoon of fresh, unprocessed, red chili pepper, you will get the following as nutrition benefits:

There are lots of vitamins and minerals in chili peppers.

However, because we do not eat much of chili peppers (due to their hot taste and flavor), the daily nutritional intake that we get from them are not much. What you can get from these spicy ingredients include (2):

Chili peppers are loaded with capsaicin.

They are also rich in carotenoids (a type of antioxidants), which have a lot of health benefits.

Research has shown that antioxidants are more readily found in mature chili peppers than they are in green (immature) peppers (3).

Chili peppers have a very hot taste, that’s uncontestable. However, they are healthy. Indeed, they have long been identified as a healthy spice.

The major bioactive component of chili pepper is capsaicin. It has some very important properties.

Capsaicin has a very high affinity to pain receptors. This creates a burning sensation which in the actual sense does not trigger any burning injuries.

Apart from the hot flavor of chili pepper, the affected pain receptors also become insensitive to other forms of pain, like heartburn (GERD).

One research showed that daily consumption of red chili pepper by heartburn patients caused a worsening of the pain at the beginning of the study. However, the pain improved over time (11).

A 6-week study showed that daily consumption of 3grams of pepper improved heartburn in GERD patients (12).

However, it should be noted that this desensitization effect of chili pepper might just be temporary. A study showed that the effect was reversed 3 days after intake of capsaicin was stopped (13).

Obesity is endemic. It is common both in developed and underdeveloped nations of the world. A person that is obese is at risk of many chronic diseases, including diabetes and heart disease.

Studies have shown that capsaicin, the major bioactive compound in chili pepper can enhance weight loss. It does this by stimulating fat burning and also reducing appetite (14, 15).

The capsaicin that is present in red chili pepper may also reduce the appetite. In a research involving 24 people, it was discovered that regular intake of capsaicin before a meal caused a reduced intake of calories (22).

In another research, this time involving irregular consumption of chili, it was also found out that calorie intake and appetite was significantly reduced (23).

Not all studies have found chili peppers to be effective. Other studies saw no significant effects on calorie intake or fat burning (24, 25, 26).

It is important to note that chili peppers may not all that be effective all alone. Tolerance to its effects is a gradual process, thus limiting its effectiveness (15).

Chili peppers have some disadvantages, but not in all persons. One should also note that not everyone likes its effects.

Chili peppers have a hot flavor, and a burning one at that.

Capsaicin is responsible for this sensation. Capsaicin has a high affinity to pain receptors and this causes the burning sensation.

Do you know pepper spray? Well, it is made from oleoresin capsicum, a compound that is extracted from chili peppers (27).

Too much of capsaicin causes swelling, inflammation, redness, and pain (28).

Constant exposure to capsaicin results in the insensitivity of certain pain neurons to further pain.

Too much of chili can cause some discomfort or distress in the intestines of some persons.

The symptoms include pains in the abdomen, cramps, diarrhea that is painful, and a sensation of burns in the gut.

Stomach pain and diarrhea is common in patients that have irritable bowel syndrome. If IBS patients who are not used to chili take it in their meals, then they may experience a temporary worsening of IBS symptoms (29, 30, 31).

Because of this, IBS patients should watch their intake of chili.

The risk of cancer is increased

Cancer is a complex health disorder. Its main feature is random and abnormal cell growth.

There are mixed evidences on the effects that chili has on cancer.

Studies carried out on animals have shown that capsaicin may either be pro or anticancer (32).

Human studies have shown that excessive consumption of chili pepper may increase one’s risk of cancer, mostly cancer of the stomach or gallbladder (33, 34).

As a plus, an Indian research has shown that red chili powder may be a risk factor for throat and mouth cancer (35).

It is important to note that no research has proven that actual consumption of chili peppers causes cancer. NO! The research only shows that people who ate an excess of it do have a higher risk of getting it.

There is need for further research to determine whether prolonged intake of chili or capsaicin supplements is safe in the long term.

Everyone has heard of chili pepper if not for anything, but for it’s pungent, hot flavor.

Chili peppers are rich in minerals, vitamins, and many important phytochemicals.

Capsaicin is one the phytochemicals in chili pepper. It has many health benefits, and also some demerits.

Studies have shown that chili pepper has analgesic and weight loss effects.

However, it also causes a sensation of burning, which many people find unpleasant. It also causes an upset of the gastrointestinal tract.

Before eating chili peppers, be sure that you know your tolerance limits.