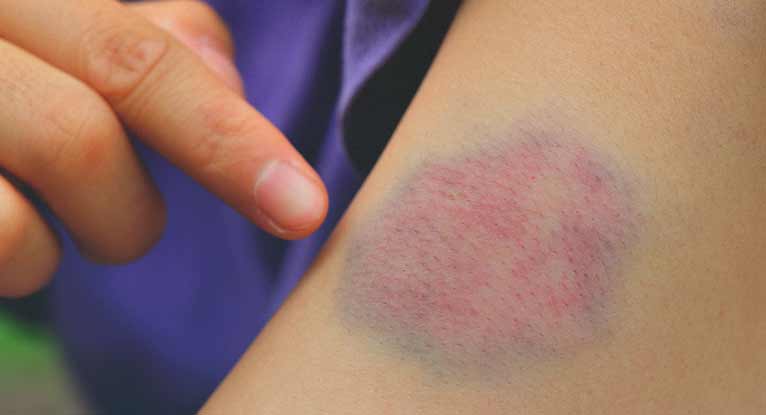 A bruise is also known as a contusion. A person has a bruise when a small blood vessel beneath the skin surface breaks. Blood then leaks into the surrounding tissue.

Some medical conditions can increase a person’s risk of a bruise, especially conditions that trigger blood clotting disorders or reduces the number of circulating platelets. Thrombocytopenia is an example of such conditions. Your risk of sustaining a bruise may increase as you get older and your skin becomes thinner.

Pain and soreness at the injury site also accompany a bruise. The bruise may change colors, ranging from red to purple, and even brown to yellow before it resolves completely.

Some patients have reported that their bruise itches. A bruise itch is an established medical condition known as pruritus. However, why this happens isn’t exactly clear.

Some medical conditions, such as liver disease and leukemia, and even chemotherapy, can cause a bruise itch. Excessive scratching of an itch can also cause a bruise.

In the absence of any underlying conditions, it is unclear why one may experience a bruise itch especially when the bruise is in the process of healing. Some theories have been made, but no definite conclusion has been reached. Unless you experience other symptoms, an itchy bruise should not cause much concern and will likely resolve in a few days.

Causes of a bruise itch

Like we’ve said, no one knows why a bruise would itch especially when there is no underlying medical condition. Several theories have been formed. These include:

It is a fact that dry skin can itch. Dry skin due to health disorders, like kidney disease or diabetes, or living in a dry, cold climate. Bruising is more common and more frequent in older people. They are also more prone to dry, itchy skin.

What causes a bruise itch along with a rash or lesion?

You may experience a bruise itch if the bruise was caused by an underlying rash, lump, lesion, or any other factor.

Bites from insects such as the fire ant, a mosquito, flea bite, chigger, or a tick can cause excessive scratching. This is due to the reaction of your body to the venom injected into your skin by the offending insect.

If you scratch the bitten part excessively, you can injure the skin and the bruise. You will continue to experience a bruise itch until your body stops reacting to the bite. Some species of tick can also cause an itchy rash that looks just like a bruise.

Frequent bruising, or a bruise that fails to heal, alongside an itch, may be a symptom of leukemia. Other symptoms include:

Sometimes, a woman may have a bruise-like feature on the breast. This may be inflammatory breast cancer. You may also have a warm and tender feeling on your breast and may spot a lump near or under the breast. You may also experience an itch, most times under the nipple.

Some diseases of the liver, such as cirrhosis and liver cancer, can also cause bruising and a bruise itch.

Other symptoms of liver diseases include:

Antibiotics and chemotherapy may also cause itchiness of the skin and bruising.

How to treat an itchy bruise

If your itch is caused by dryness of the skin, here are some ways by which it can be resolved:

Talk to your healthcare provider if you think that the itch and the bruise is a side effect of a medication.

If the itch is caused by a rash or an insect bite, you can resolve it by:

Try not to scratch a bug bite. Scratching can cause your skin to break, thus putting the skin at risk of infection.

Most times, bruises resolve without a cure. The blood will be reabsorbed by the body within a few days. You may cold compress the bruise if there’s pain or swelling.

Medical researchers do not fully understand why a bruise itches as it heals, but some theories have been formulated. A bruise that itches as it heals is no cause for worry. Some medical conditions can cause easy bruising as well as a bruise itch. If you experience other symptoms apart from the bruising and itching, or you think that your symptoms may be caused by a medication, see your doctor. Also, see your healthcare provider if your body bruises and itches easily without any cause.

Why do I have a Sore Throat?