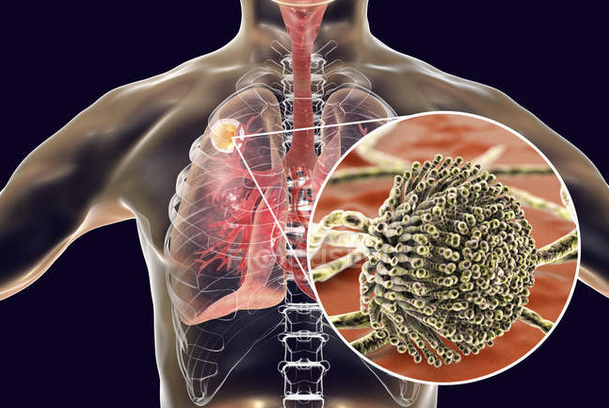 The Aspergillus fungus causes an infection, an allergic reaction or a fungal growth in a condition known as Aspergillosis. The Aspergillus fungus lives and grows on decaying vegetation and dead leaves. Being exposed to the fungus is not a certainty that you will get the disease. The fungus is encountered by everyone almost on a daily basis without contacting the disease. The weaker the immune system gets in an individual, the more likely the fungus to infect the person. It is also common in those with preexisting lung disease.

TYPES OF ASPERGILLOSIS AND THEIR ATTENDANT SYMPTOMS

In allergic bronchopulmonary aspergillosis, the Aspergillus fungus causes allergic reactions like coughing and wheezing. Those with a preexisting lung condition such as cystic fibrosis or asthma have a greater chance of developing this condition. ABPA also presents with shortness of breath and the general symptoms one feels when not well.

The invasive form of aspergillosis develops when the immune system has been rendered weak by chemotherapy and other conditions such as cancer, diabetes, leukemia, and AIDS.

A weakened immune system is unable to effectively fight off infections. This form of aspergillosis penetrates the lungs and can be spread to the kidneys and brain. Those who have a weak immune system will have a very severe form of infectious pneumonia when it occurs, and it can even be fatal.

A lung infection can also spread across the body to result in new symptoms.

In the presence of tuberculosis or another lung disease, being exposed to the Aspergillus fungus can make one to develop a fungus growth or a fungus ball. This growth is made up of the fungus, blood clots, and white blood cells. This growth usually does not disseminate to other body areas but the ball can expand and cause damage to the lung tissues.

An aspergilloma presents with a cough which may or may not is accompanied by blood in the sputum and shortness of breath.

Other symptoms of aspergilloma include:

Aspergillosis occurs in a setting of a weak immune system with an exposure to the Aspergillus fungus. The fungus may be carried by compost piles, stored grains, marijuana leaves, and even decaying vegetation.

The doctor will review your medical history for likely risk factors for the condition and also discuss your symptoms. Invasive aspergillosis is tested by obtaining a biopsy of the lung tissue. The doctor can also pass an instrument through your mouth or nose to get to the lungs and collect a small amount of fluid for fungal testing.

Other tests that can be done include:

The medical or surgical modality of treatment can be used.

Antifungal medication can treat all forms of the illness. The invasive form of aspergillosis can be treated using oral or intravenous drugs such as voriconazole. The allergic type can be treated with antifungal drugs alongside medications that suppress the immune system, such as prednisolone.

When the heart valves are affected during the infection, surgery may be needed to get rid of the infected areas of the valve. Following surgery, extensive antifungal treatment is given.

Always remember that this disease is not communicable.

Aspergillosis usually heals following treatment. Re-infection can occur if one is exposed to the fungus after treatment. To recover from invasive aspergillosis, the immune system has to be strong and the overall health should be good.

Aspergilloma may not need treatment because it may be self-limiting.