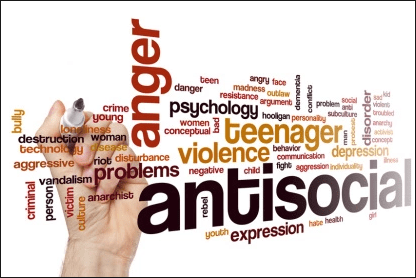 What is antisocial personality disorder?

Everyone is unique in their own way. The way a person thinks or the manner with which they behave may be harmful both to themselves and people around them. Those suffering from antisocial personality disorder (ASPD) have a mental affectation that makes them to want to manipulate and even violate those around them. This condition takes over them.

ASPD mainly starts in childhood years or early adolescent years and tracks down even to adulthood. Those with ASPD over time manifest certain features such as:

Those with this condition usually don’t care if they disobey the law. They don’t feel sorry even if they lie and wrongly accuse an innocent person of their crime. There is a gender predilection with ASPD being three times more common in men than in women, this data is from a study done in Alcohol Research and Health.

The main cause is not known but some well-known risk factors have been recognized. Genetics and environmental influences may play a role. Also, being a male increases the likelihood of developing the condition especially if you have also:

Children who suffer from antisocial personality disorder often seem wicked in their actions to animals and even start fires illegally. The features in adults include:

In addition, they have a higher likelihood of becoming substance abusers. The use of alcohol has been noted, in research done to check their linkage, to increase violent confrontations in those with ASPD.

A diagnosis of ASPD can only be made in adults as children exhibiting similar symptoms may be deemed to have a form of conduct disorder. Diagnosis of ASPD in adults is made only if there is a history of a form of conduct disorder in childhood and part of teenage years especially before the age of fifteen. The mental health physician will try to ask about past behaviors and current behaviors in the adult so as to rule out or even get supportive evidence for the diagnosis of ASPD.

To be diagnosed with ASPD, you must meet the following criteria:

For those who have schizophrenia or bipolar disorder, the symptoms of ASPD are only documented or observed when they are not having an episode of mania or schizophrenia.

It is extremely hard to treat antisocial personality disorder. Usually, the physician tries multiple modalities of treatment. Psychotherapy in combination with pharmacotherapy is usually tried. The effectiveness of these methods in the management of ASPD symptoms is a little hard to evaluate.

Depending on the condition, the mental health physician may urge one to try different kinds of psychotherapy.

Cognitive behavioral therapy is a behavioral change method that can assist in exposing negative behaviors and thoughts and further identifies ways of replacing these negative thoughts with positive ones.

Psychodynamic psychotherapy acts by making one to be well aware of the negative thoughts and behavior one has unconsciously. When the person is then aware, they would most likely want to change it.

There are no particular medications made solely for the treatment of ASPD. The doctor may prescribe any of the following drugs:

The health care provider may subsequently urge you to stay back in the mental health hospital and receive comprehensive treatment.

Asking someone with ASPD to seek help

It is difficult to see someone manifest harmful behaviors especially if it is someone you really care about. It is even harder when those harmful behaviors are directed at you. The main problem with asking someone with ASPD to seek help is that they are not even aware that they have the condition so it may be hard to convince them to do so. Since everyone has their rights, you cannot drag someone with ASPD to go get treated, the best you can do is to practice coping mechanisms for yourself- learn how to cope with the pains of watching a dear one with ASPD. A counselor may suggest ways of coping and actually help you through it.

These people with ASPD do not seek help except they find themselves in situations where they have broken the law and the court makes treatment mandatory for them. They have higher chances of committing crimes, taking drugs of abuse and even ending up in jail. The symptoms they face progressively worsens from their adolescent years till early adulthood. Getting treatment will really help with relieving symptoms. For some set of people, their symptoms may be less with increasing age such that by the time they reach forty years, they start to feel and behave in a better way.

When it feels as though someone may likely harm himself/herself or may be a threat to harm to someone else, do the following:

The national suicide prevention lifeline is reachable at 800-273-8255, call this line if you think an individual is considering suicide.