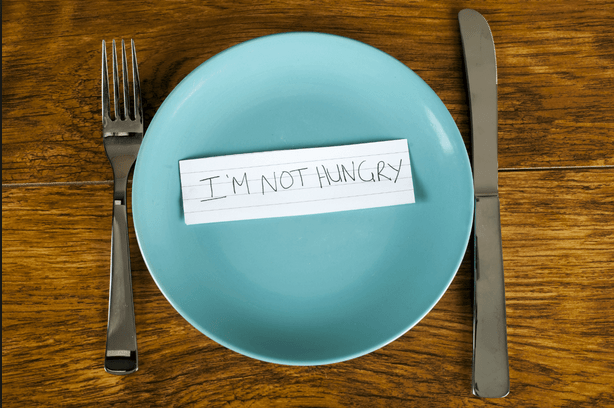 Anorexia is simply a decline in appetite. It only has to do with appetite though people tend to think it to be the same as “anorexia nervosa”. There is a clear distinction between the two. Whereas people suffering from anorexia nervosa deliberately stay away from food to avoid weight gain despite a good appetite, those with anorexia unconsciously lack interest in food. A lack of interest in food may be caused by a disease condition.

By itself, anorexia, is not a disease but could be the presenting feature of a medical condition. A physician should be consulted if there’s a notable decline in appetite. Some usual causes of anorexia include:

This may follow a significant life event. The person here usually fails to eat may be due to not remembering to eat or actually lacking the needed appetite. The particular reason for this isn’t known as there’s the other end of the spectrum where people with depression tend to overeat.

Cancer affects almost all systems of the body including the digestive system. Late-stage cancer can result in an appetite loss thus, it is a usual thing for those with late-stage cancer to reject food. As the cancer advances, the bodies of these patients gradually save energy for later use because digestion and absorption are impaired ultimately resulting in loss of appetite. Also, the drug treatment of cancer is accompanied by several side effects, leading to an appetite loss mainly because these side effects do not encourage the ingestion of food e.g. mouth sores, nausea, difficulty swallowing or masticating, irradiation treatment too. As a caregiver, do not be overly worried if the patient refuses food or tends to take more of liquid foods.

Hepatitis is liver inflammation which could be caused by an infection. It is blood-borne and spreads when there is a contact with infected blood. The causative organism is the single stranded DNA virus, Hepatitis C virus. When Hepatitis C isn’t adequately treated or if left untreated will result in liver cirrhosis which causes liver damage. Ultimately, liver cirrhosis can culminate in liver cancer presenting with the symptoms of nausea and/or vomiting before, during or after chemotherapy.

This means kidney failure.  Normally, nitrogenous wastes are being excreted via urine but in those with damaged kidneys, the waste products are not properly filtered and so accumulate resulting in increased blood urea levels, a condition known as uremia. Uremia amongst other symptoms can present as nausea thereby causing a decline in the intake of food as the food may no longer taste as nice as it used to.

Since the digestive system is inadequately perfused, digestion is impaired thus making food less attractive to eat. The resultant condition is anorexia.

The mechanisms by which appetite loss occur in this group of people is diverse. From WHO stage11 classification of HIV, symptoms begin to occur and one of such is mouth sores. By reason of the pains accompanying these sores, individuals tend to lessen their food intake or wholly lose interest in eating.

Another means is through the common route: nausea. The highly active anti-retroviral drugs (HAART) used for the management of HIV/AIDS have nausea as a common side effect thus reducing food intake. Be advised to talk to a physician if you are on HAART and experiencing nausea.

Most sufferers of the condition are depressed thereby lacking interest in food. Since it is a memory-affecting condition, there is difficulty in telling whether the individual experienced pains in the oral cavity during eating and so he/she quietly loses interest in food.

Also, hypothalamus, which is the area of the brain responsible for maintaining a balance between hunger and appetite is damaged in Alzheimer’s disease, therefore, making it difficult to tell when one is hungry thus reducing the food intake. A person with Alzheimer’s disease who leads a sedentary life will often come down with appetite loss.

Tips for getting proper nutrition

Anorexia can cause weight loss even without your knowing. It can also cause kwashiorkor or marasmus. It is of utmost importance to eat even when you do not feel hungry just for the sole aim of maintaining proper nutrition. The following tips are helpful for day-to-day running:

When appetite loss does not occur frequently, it may not be a cause for concern. However, when it occurs with evidence of poor nutrition such as headache, dizziness and body weakness then a Doctor should be contacted.

Food lack can cause wasting of your muscle mass and also poor body function.

The following questions are likely to be asked by a Doctor you meet in a bid to find out the current health problems you may be undergoing.

Certain tests can be done such as imaging tests like X-ray, MRI; these view the interior of the body to look for inflammation or cancer cells. Urine and blood tests can also be carried out to check for liver and kidney function. When signs of malnutrition are evident, hospital admission is mandated so nutritional intervention can be carried out.

The key to ending appetite loss is by treating the root cause. The Doctor will likely refer you to a dietician to plan your meals and also counsel on adequate nutrition. You may lead him into suggesting or prescribing appetite-stimulating drugs.