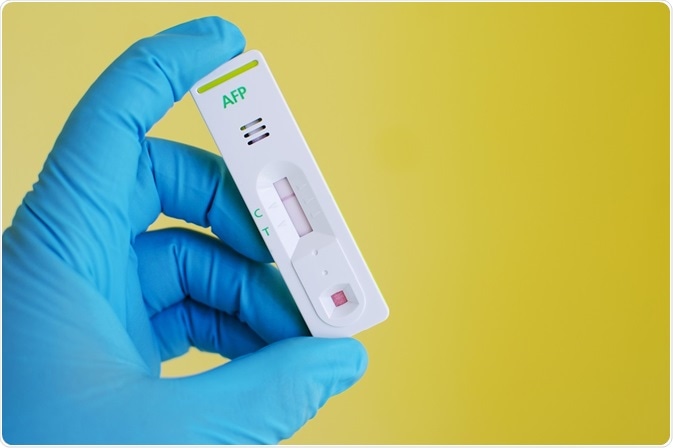 What is an alpha-fetoprotein test?

Alpha-fetoprotein test is a blood test used to determine the level of alpha-fetoprotein in the blood. It is a component of the quad screen or triple screen in the second trimester of pregnancy.

Alpha-fetoprotein is produced by the yolk sac of an unborn baby. Other organs of the fetus that produces AFP include the liver and the gastrointestinal tract. The alpha-fetoprotein so produced then circulates through the maternal and fetal blood. People who are not pregnant still have some quantity of AFP in their blood. However, the level is usually very low. If the level of AFP is high in non-pregnant individuals, then it may be an indicator of some liver disorders.

Of what use is an alpha-fetoprotein test?

The alpha-fetoprotein test is usually done between the 14th and 22nd weeks of pregnancy. The most accurate results is gotten between the 16th and 18th week of pregnancy. Hence, it is absolutely important that a woman knows the day she got pregnant.

The alpha-fetoprotein test is usually a component of a quad screen. This screening test also examines one’s level of:

The chances of the fetus having a genetic defect can be ascertained by the quad screen result, age, and ethnicity. Defects that can be diagnosed by the AFP test include spina bifida and other defects of the neural tube, and chromosomal disorders such as Down syndrome. With the Alpha-fetoprotein test, the physician can determine whether or not you need further tests for these conditions. That you have a positive test does not imply that your baby will be born with a defect.

The alpha-fetoprotein test is extremely important for pregnant women who are at a high risk of having children with birth defects. Other women who may find this test important include:

For those who are not pregnant, an alpha-fetoprotein test may help in the diagnosis and monitoring of some liver disorders such as liver cirrhosis, liver cancer, and hepatitis. It can also help to spot other cancers such as cancer of the:

What are the risks associated with an alpha-fetoprotein test?

The procedure for an alpha-fetoprotein test

First of all, the blood will be drawn. The drawing of blood is an outpatient procedure that takes place in a diagnostic lab. Only a few minutes are required for this procedure and it is relatively painless. There is no need for any special preparation prior to an alpha-fetoprotein test.

Healthcare personnel will use a small needle to draw blood from your vein. The vein is usually from the hand or the arm. A specialist will then analyze the blood sample. It takes at most a week or two for the test results to be made available.

What the alpha-fetoprotein test result mean?

For non-pregnant women, as well as men, the normal amount of alpha-fetoprotein usually falls within the range of 9-10 nanograms per milliliter of blood. If you have an unusually high level of AFP, though you are not pregnant, then it may be an indication of the presence of some cancers or liver disorders.

If you are pregnant, and you have AFP levels that are higher than normal, then it may be an indication that the fetus has a neural tube defect. However, the most common cause of high AFP levels is the wrong dating of the pregnancy. There is a wide variation in the levels of AFP during pregnancy. The test result will be inaccurate if you have been pregnant for a longer or shorter period of time than you estimated.

If you have a low AFP level during pregnancy, then it may indicate a chromosomal abnormality in the fetus, such as Edwards’s syndrome or Down syndrome.

Studies by the American Pregnancy Association have shown that 25 to 50 in every 1,000 pregnant women have abnormal results in a given alpha-fetoprotein test. Surprisingly, only 1 to 16 in 33 women with abnormal results may have a baby with a birth defect.

That you have an abnormal test result is no indication that your child will be born with a birth defect. What it implies is that you need more tests to enable your physician to make a diagnosis. Your physician may carry out another alpha-fetoprotein test followed by an ultrasound to take images of the fetus.

The physician may ask for an invasive test such as amniocentesis if you still have abnormal results. In amniocentesis, a small quantity of amniotic fluid is drawn from around the fetus and analyzed in the laboratory.