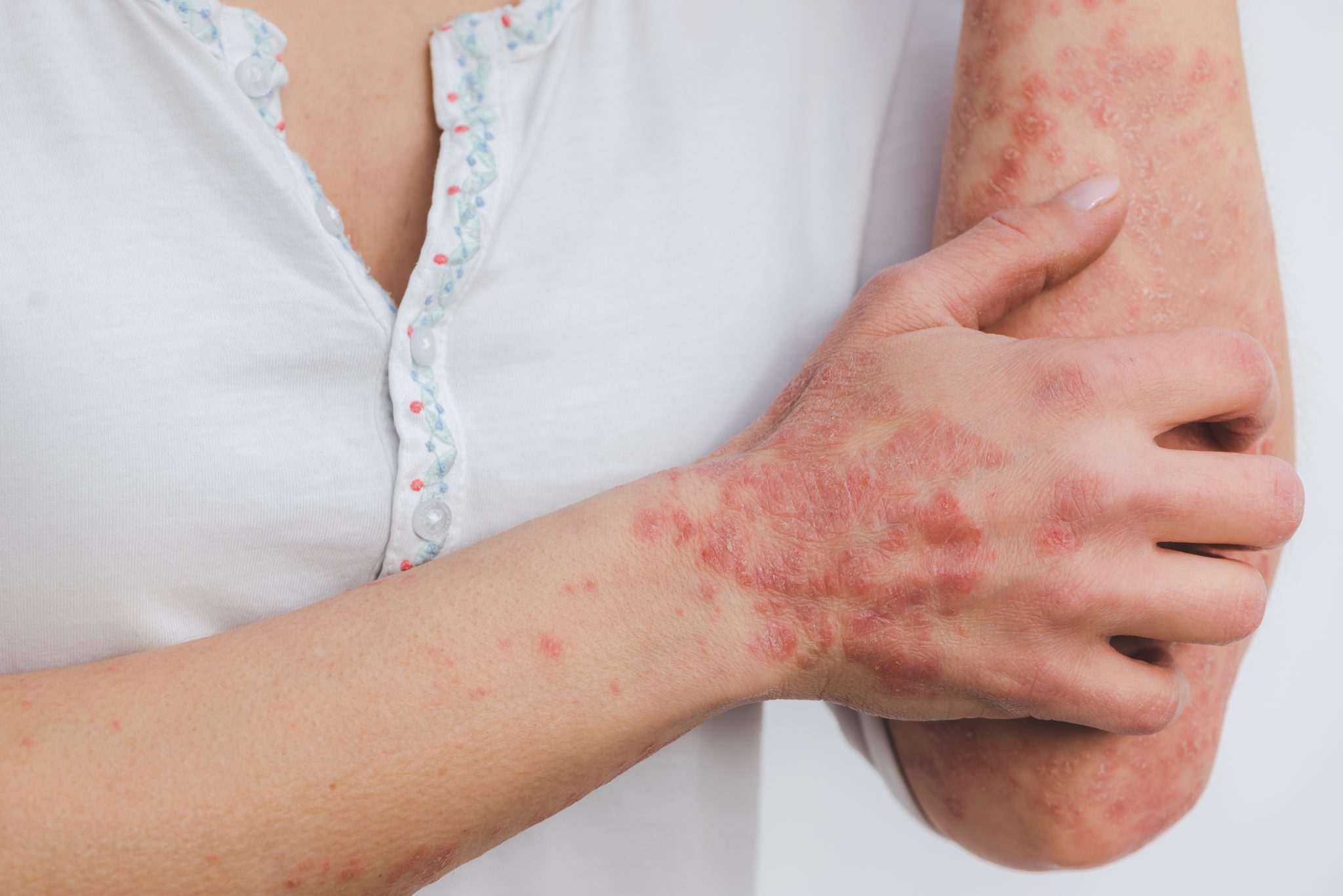 Psoriasis is an autoimmune condition whose primary symptoms include scaly and inflamed skin. The human skin produces new cells every month. However, this is not the case in people with psoriasis. They grow new skin cells in a few days. The immune system of psoriasis patients is hyperactive. Their bodies produce new skin cells faster than it sheds the old ones. These cause the skin cells to accumulate and create itchy, scaly, and red skin.

Studies are ongoing to determine the precise cause of psoriasis. However, a report by the National Psoriasis Foundation says that at least 10% of individuals with psoriasis inherit one or more of the genes that may trigger this condition, but only 2-3% of people get the disease. This means that several factors contribute to the onset of this condition. You’ll inherit the gene and also get exposed to some external factors.

Psoriasis manifests as an itchy, red patch on the skin. The patch is usually covered with silvery scales. Other symptoms of this condition include:

The patches may be few or may cover large scaly areas. Psoriasis usually occurs in phases, with flares lasting for a couple of weeks or months, and then disappearing for some time. In some cases, it may go into full remission.

Below are some of the risk factors that can contribute to the onset of psoriasis.

Stress may not cause psoriasis, but it may trigger an outbreak or exacerbate an already existing case.

Psoriasis may appear on those parts of your skin where injuries, sunburns, scratches, and vaccinations have occurred.

Symptoms may worsen in patients whose immune system has been compromised. These include people with AIDS, cancer patients undergoing chemotherapy, or people who have some form of autoimmune disease like celiac disease or lupus. Young adults and children with upper respiratory infections or strep throat also have a high risk of complicated psoriasis.

A family history of the condition

If one of your parents has psoriasis, then you have a very high chance of getting it. On the other hand, if both parents have it, then your risk of having this condition is doubled. A parent with the disease has a 10% chance of transmitting it down to their child. On the other hand, if both patients have the condition, then the chance of passing it down to their child is increased by 50%.

Plaques – that is reddish skin, with dead, white matter on top – are major symptoms of psoriasis. Plaques can develop in deep skin folds. Sweating and friction in deep skin folds of overweight people can aggravate psoriasis or even cause it if the condition wasn’t there.

A study published in JAMA Dermatology found that smoking increases a person’s chances of having psoriasis. The greater number of cigarettes you smoke each day, the higher your risk of acquiring psoriasis. The risk is also higher in women than in men.

A 2012 study published in the Journal of Clinical Case Reports found that people who are fairer in complexions have a higher risk of developing psoriasis compared to dark-complexioned people.

Psoriasis is worsened by winter and other cold climatic conditions. The extreme dryness and cold that accompanies certain weather may dry up the moisture on your skin, and cause inflammatory symptoms.

Another study published in JAMA Dermatology has found that intake of alcohol is linked with psoriasis in men. According to researchers, alcohol worsens psoriasis symptoms because of its upsetting effect on the liver, as well as its ability to trigger the growth of Candida, a yeast that worsens symptoms of psoriasis.

Its side effects may be fatal especially when mixed with certain psoriasis medications.

Several treatments can be used to manage the symptoms and pain of psoriasis. Home treatments for psoriasis include:

Other treatments for this condition include:

The primary causes of psoriasis are not fully understood. However, a lot is known about its triggers and risk factors. Medical researchers are continually investigating this condition. Psoriasis may not have a cure for now, but there are several treatment options to manage the symptoms and pain.

The Impact of Sodium Bicarbonate (Baking Soda) on…

Organic Food vs Non-organic Food: Which is Better?